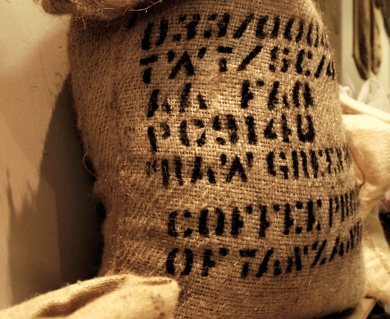 Coffee production in Australia dates back to the early 1880’s and showed early promise with arabica beans grown on the far north coast of NSW winning awards in Paris and Rome in the mid 1880’s.

Australia’s remoteness from Europe, resultant delays in transport, rising labour costs and the absence of “coffee slaves” for picking, led the industry to fall into decline.

A century later coffee plantations were again established with the all important costs of picking reduced to economical levels by the invention of a mechanical harvester.

Australian arabica coffee is once again being recognised world wide for its unique qualities.

Coffee is now a flourishing industry with plantations in the Northern Rivers region of NSW and Atherton Tablelands in Queensland.

Because of the particular micro climatic conditions, Australian arabica coffee is notably lower in caffeine and is highly regarded for its sweetness and medium body.

As there are no serious pests or diseases requiring the use of harmful pesticides, Australian coffee is one of the most naturally produced coffees of the world. 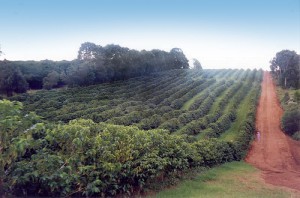 Our plantation was laid out to conform to machine harvesting. Wide rows, unloading bays and turning circles but at the same time preserving the nearby old growth rainforest.

Water from our streams is pumped to the coffee trees via a drip irrigation system – soluble fertilizer can be automatically mixed in through our fertigation system as required. Between the rows the grass is mown to a keep a park-like appearance. 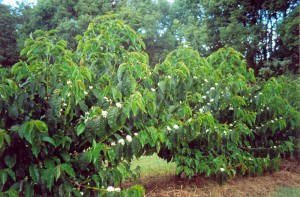 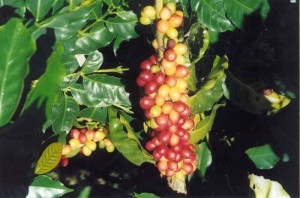 The cherries which develop along the branches, ripen from green to pink to red (mature) dark purple (overripe) then black. Harvesting usually begins early August through to October. 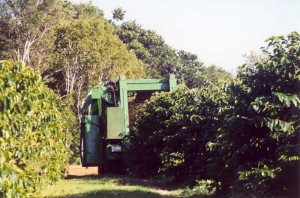 The new versions of coffee harvesting machines are a far cry from the original “remove all beans” designed in Brazil. The modern machines have light-weight fingers and by gently shaking the branches dislodge the ripe cherry leaving the immature ones to ripen for a later pass. 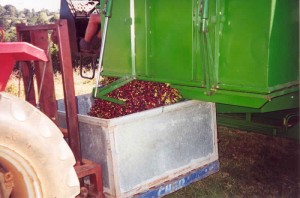 The dislodged cherries fall onto collector conveyors and from time to time the holding bin is emptied into field bins for transport to the pulping plant.

Pulping – The first operation is the sorting of the beans removing the twigs, leaves and any unripe or overripe cherries dislodged by the harvester.  This is done through the medium of the Jindebah water-saving pre-sorter outside the pulping shed.  The remaining beans are  then conveyed into the shed where our South American designed pulper (that uses minimal water) removes the outer covering of the cherry.  The discarded mulch ends up in our worm farm and is eventually put to good use in the plantation.  Only top quality beans pass through the system and the resultant beans are known as “wet parchment”

The wet parchment  is then conveyed to the large multi chamber gas fired dryer.  The beans are constantly turned with computers monitoring moisture levels, temperature etc. during the process which takes the best part of 2 days. The beans are now known as “dry parchment” and we allow them to store in large 1 ton bags to mature prior to the next stage.

The dry parchment now enters its final processing stages. The beans are hulled and polished which process removes the parchment and silverskin. The arabica beans are then graded and bagged ready for roasting. 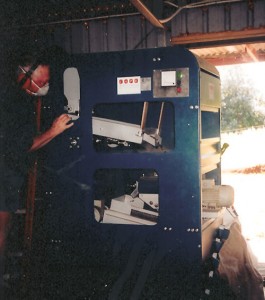